Annual Collectiva International Exhibition brings together national and international artists and designers, by organizing an event at Porto that promotes emerging talents which works within the contemporary jewelry field.

After a several months and really really busy period that I could'nt write on my blog (those that follows Nobahar Design Milano knows why!) I taught Collectiva Meeting 2019 is a good oppurtunity to start a new post on the blog.

The Collectiva Meeting is an annual event that brings together hundreds of international artists and designers, by organizing an exhibition that promotes their works in the contemporary jewelry field.

After the success of the first edition in 2018, the Collectiva gallery held the second edition of Collectiva Meeting on September 22, 2019 by bringing together around 180 emerging talents from all over the world. 20 artists and designers have been awarded on this day by the gallery, Roof Magazine, Faire Magazine, Autor and Portojóia, even if, from my point of view, it was really difficult to choose among all the unique and creative contemporty jewelries presented in the contest which one is the best.

Here I share the works that is selected under the name of jewelryAround in which I found a different or bold creative touch that has been applied by it's maker to the piece.

Do not forget if you go to Porto by any chance that still until the 31st of October you can still visit the exhibition in Centro Comercial Bombarda in artistic area of Porto.

Tthe most exciting works presented at Collectiva Meeting 2019 have been awarded, the selection of the winners was made by a invited jury: Carlos Silva, Carla Solheiro, Dan Piersinaru, Fatima Santos and Liliana Guerreiro and Olga Noronha contributed to the selection of honourable mentions. The Roof Magazine Award was given by Inês Mendes and finally the Faire Magazine Prize was awarded by Fábio Sernadas and Pedro Afonso.

- Collectiva gave the opportunity of being a guest desginer at Collectiva gallery during a period of 3 months as an award to Ana Marchetanu, Mia Kwon Jewellery, BYMIA and Adriana Genos.

- The ROOF Magazine, a magazine that travels the world to bring together the best proposals of architecture, interiors, design, culture and lifestyle, selected Juanjo García Martín as the winner of the collectiva meeting Roof Magazine award.

- The FAIRE Magazine, which is known for supporting and promoting new projects and challenges, has selected Daniel von Weinberger to dedicate an editorial to his jewellery.

Most of the works presented at the event were amazingly creative and I had really difficulty to choose my favorite ones. But if I have to choose I go with works of:

She portray natural landscapes that have been distrupted by plastic bags which ended up scattered in the fields or floating in the oceans. 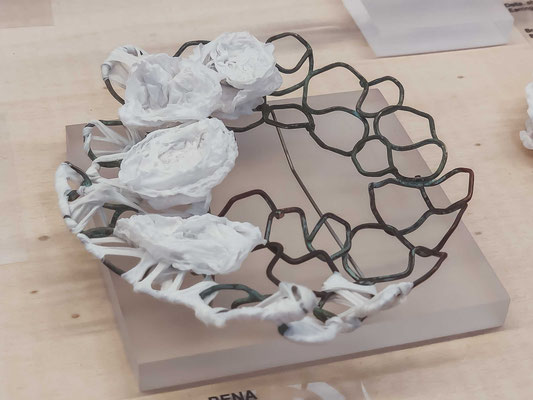 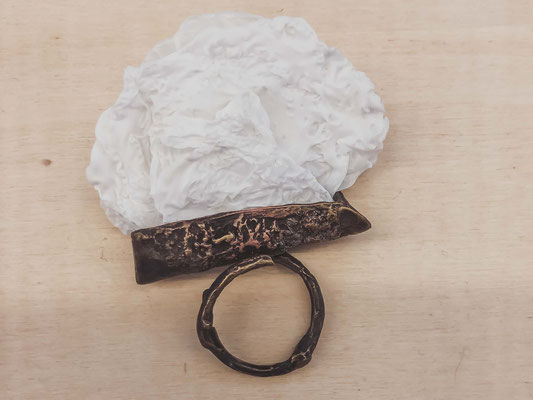 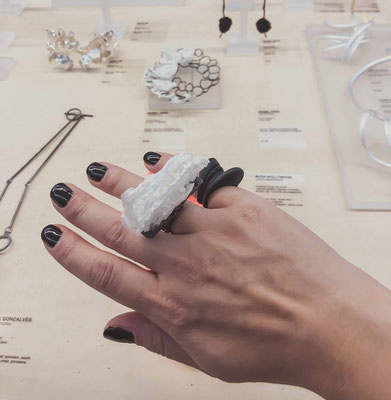 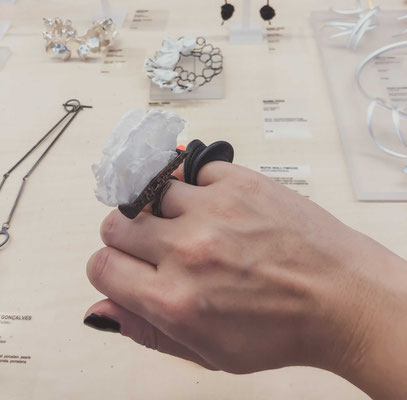 This collection is inspired by the French poet of the nineteenth century Charles Baudelaire works, a book of lyric poetry "les Fleurs du mal". Inside the pieces you will discover the smell of self-composed fragrance, which creates an extra dimention, attracting your senses, and stimulating your imagination by looking and wearing the jewelry.

For her porcelain represents a unique and privileged expressive tool, where strenght and delicacy can coexist.

She see calligraphy as a state of expression of material world. Since no natural language is purely written, it is somewhat of an artificial construct.

With this collection she wanted to illustrate the special relationship she has with her land, the Karst. Each stone eaten by the sea and each branch broken by the Bora wind are imperfect and beautiful.

Tour à Tour I Art Bijoux is established in 2016 by sharing different views and storie by their handmade jewelries. These pieces are from the winter blossom collection. 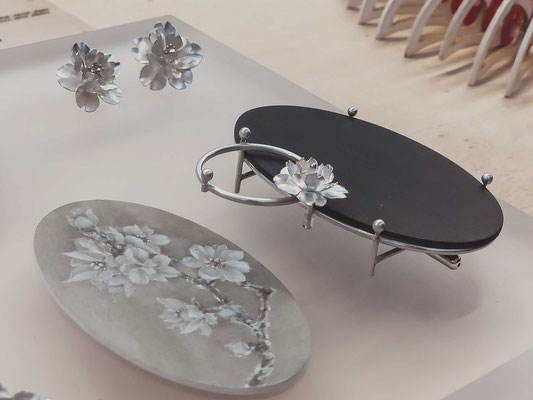 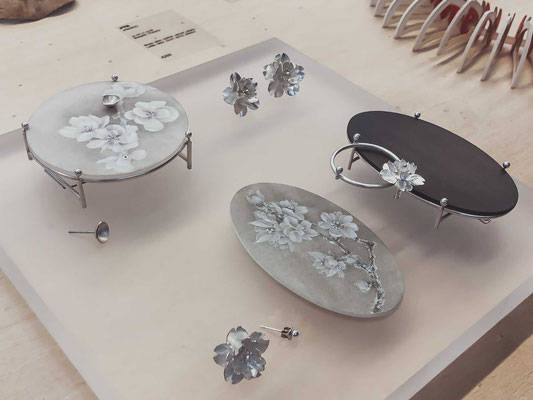 Her workis about creating micro landscapes by combining metal work with found wood, stones and etc.

Fruzsi doesn't follow traditional forms and trends. She get inspired by nature and the pieces reflect joy of creation, instinct, and the intimate relationship between the maker and the object.

A Creatures of her imaginations, crawling in the deep, protected by their black and white shell.

Her collection is an attempt of reusing and recycling plastic, especially single-use non-recyclable ones in the hope that it will not end up in the trach can.

She mainly works with iron to create a big volume but still extremely light.

A collection inspired by fireweed, commonly seen on the roadside at the end of the summer in Finland.